Whether Starting or Managing Your Business, Having

an Attorney who Knows all you need to Legally

Protect your Business and Employees is Second to none. 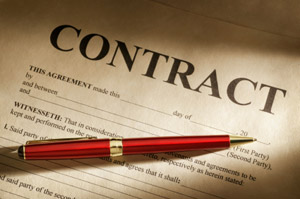 Agreeing to terms in business dealings is always a great feeling, but that feeling can be short-lived if problems arise later and a contract is not in place or poorly written.

Attorneys are experts at foreseeing conflicts and problems that occur in businesses. Why? Because attorneys who draft contracts often practice business litigation, providing firt-hand experience of common occurrences and the knowledge of what could have avoided a potentially costly and time-consuming conflict in the first place.

Clear language is the cornerstone of a good contract. Without clear language, a judge or arbitrator will need to interpret the contract and determine what the parties had intended when originally drafting or agreeing to an original contract.

During the process of drafting a contract, both parties will often find differences in how the contract was intended. It is much easier and cheaper to address these concerns initially than at a later point.

As experienced business attorneys, we can help settle these differences early on and quickly, allowing both parties to move forward in a mutually beneficial business dealing. We understand it is important to get the deal quickly and not be stuck in legal maneuvering.